In entrepreneurship literature the ‘pursuit of opportunities’ is a common theme when describing the behaviour of entrepreneurs.   Louis and his friends seized their chance of setting up a business  even before they graduated.  At the time of setting up the first social media platform dedicated to sharing humorous videos, USmile, Louis was a BSc Management and International Business student at the School of Management, Royal Holloway University of London.  Thus proving that when an opportunity arises you don’t need to wait to  finish your studies to realise your dream.

Louis and his friends all hail from France and they were all undertaking their undergraduate degrees abroad.   After their first year of studying they all met up and found that their love for sharing humorous videos on current social media channels was not working for them.  So in being presented with this problem what did they decide to do?  Design their own platform. 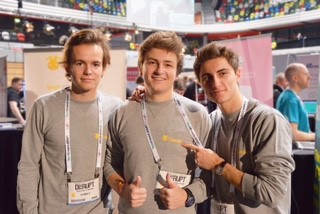 From August 2014 Louis (in the middle) and his friends, now business partners worked with lawyers, entrepreneurs and IT developers to set up a company, fundraise, build a  website and an app.  Despite the setbacks and challenges during their entrepreneurial journey Louis and his business partners successful launched USmile.  As Louis says: ‘In the end, what matters is probably not the idea but the way you realise it’.  Which Louis did along with him graduating from Royal Holloway School of Management.   To find out more let Louis and his friends make USmile here